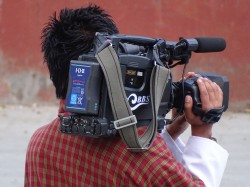 ​Preparation has started for tailormade media training in Bhutan

In October 2014 preparations for the development of the tailor-made training ‘Entertainment Media for Behavior Change’ for media professionals in Bhutan were started.

Dawa Penjor, Executive Director of the Bhutan Media Foundation, says that “People in Bhutan have practiced entertainment with an educational value, but the strategy itself is new. The training would benefit Bhutan as a whole. The participants get the skills to work on Entertainment-Education programs, which can have an immense value to a society as a whole.”

The aim of this unique training program is to train media organizations in designing and producing effective Entertainment-Education programs about social issues. In this project, The Center for Media & Health (CMH) works with the Bhutan Media Foundation (BMF), the Bhutan Broadcasting Service (BBS) and several social organizations. The project is funded by Nuffic.

During an 11-day visit, Martine Bouman from CMH met and interviewed several stakeholders. These interviews will give direction to the design of the media training program that will take place in March 2015. Here is a short clip of this preparational visit to Bhutan:

Back to news overview